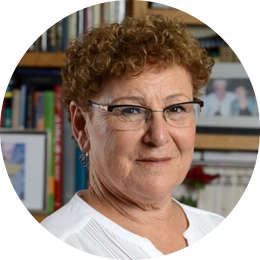 Miriam immigrated to Israel from Morocco in 1964. Miriam was a high school principal for twenty-three years and is currently a supervisor for the ministry of education. After losing her sons, Uriel and Eliraz in two separate wars, and her husband Eliezer of heartbreak, Miriam began assisting bereaved families and army wounded and became a national hero. Since then she became known as the “mother of the soldiers," voluntarily lecturing to teenagers, soldiers, and the public around the world to share her life story, leadership, and motivation.

Miriam wrote a book, Shirat Miriam (Miriam's song) which depicts the story of her life. In 2014 she was chosen to be one of the twelve figures to light a torch at the national Independence Day ceremony. In 2017, Israel's 70th year, Miriam won the Israel Prize for lifetime achievement for “strengthening the Jewish-Israeli spirit." She is the mother of six children, and grandmother of fifteen grandchildren.