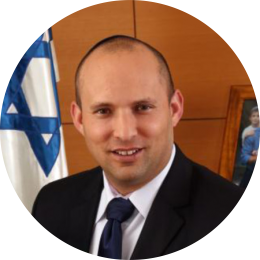 Naftali Bennett is Israel's Minister of Education and Minister of Diaspora Affairs. He is also chairman of HaBayit Hayehudi, the third largest party in the government, and a member of Israel's inner Security Cabinet. Before entering politics, Bennett co- founded and served as CEO of Cyota, an anti-fraud software company which was sold for $145 million in 2005. Today, Cyota (now RSA-Security) employs over 300 people in Israel. Soluto, another company he invested in and served as CEO of before entering politics, was sold in October 2013 for $100 million. As a commander in one of the IDF’s most elite commando units, Bennett has led soldiers on counter-terror operations deep behind enemy lines.

Today, he holds the rank of Major and is an active reservist in the IDF's elite General Staff Reconnaissance Unit, better known as Sayeret Matkal. Bennett grew up in Haifa and was active in the Bnei Akiva youth movement. He received his Law Degree from Hebrew University of Jerusalem.