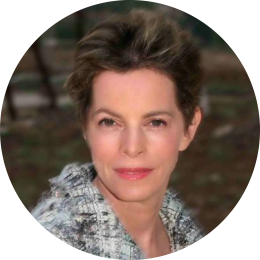 Michal Rovner is a renowned painter, photographer, video artist, and writer. Rovner offers a seamless blend of photography, video, digital art, and painting. Rovner began her adult education at Tel Aviv University. While attending this university, she founded the Camera Obscura School of Art with Arie Hammer in 1978, as an educational center for photography, cinema, and television. She received a BFA from Bezalel Academy.

Rovner then moved to Manhattan and wrote articles about arts and culture for a weekend magazine, Yediot Aharonot, an equivalent of the New York Times in Israel. In the early 1990s, Rovner collaborated with filmmaker Robert Frank on scripts for C'est Vrai! and The Last Supper. She returned to Israel following this brief collaboration and began taking photographs along the Israeli border with Lebanon in 1996, capturing the struggles of the region during the time. The work was subsequently presented at the Museum of Modern Art in New York. In 2000, she offered a video installation that covered 17 windows along Park Avenue in Manhattan, leading to an exhibit at the Whitney Museum in 2002, and she became the first Israeli artist to display there. The Jeu de Paume Museum in France chose to display Rovner's work on the exterior wall of the museum, which made Rovner the first Israeli artist to become a part of the Parisian Vies.

Rovner is still active in the art community, and is the world's most successful Israeli artist.