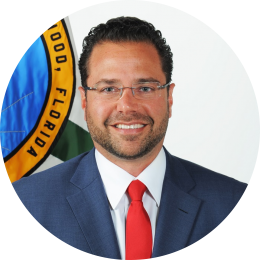 Levy went on to earn a Law Degree from Nova Southeastern University, wherein 2000, he graduated with Pro Bono Honors and a Certificate of Concentration in International Legal Practice. Levy currently serves as General Counsel and oversees Corporate Development for his family’s Hollywood-based automobile dealership.

Levy first began public service with the City 18 years ago, when he served as a law clerk in the City of Hollywood City Attorney’s Office. Later, he was appointed by the Hollywood City Commission to serve as a member of the City’s Planning & Development Board, a position which Levy held for twelve years. Over the years, Levy also served as President, Director, and Education Committee Chairperson of the Hollywood Hills Civic Association. Levy is a graduate of the Greater Hollywood Chamber of Commerce’s Leadership Hollywood program, the Hollywood Police Department’s Citizen’s Police Academy and is a recipient of the City of Hollywood’s Great Neighborhoods Challenge Community Spirit Award. Levy is also an active member of the Hollywood Historical Society, the Rotary Club of Hollywood, the Broward County Tourist Development Council, and CareerSource Broward. During his term as Mayor, Levy is committed to improving neighborhoods, ensuring public safety, helping to improve public schools and stimulate economic growth and job creation.