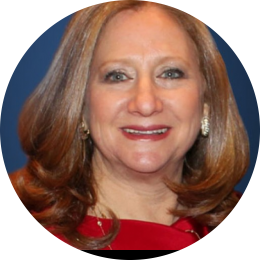 Martine Fleishman has dedicated her life to family, friends and the Jewish communal arena tirelessly promoting Israel, Jewish identity, Jewish leadership and Jewish education as well as human rights and social justice. Martine holds a graduate certificate in Non-Profit management and leadership. Her leading roles have included: President of UJA Federation’s Women’s Philanthropy-overseeing a $29,000,000 campaign; Cabinet member of COJIR, COJP and the Network Commissions of UJA Federation of New York. She is currently Chair of JAFI’s Project T.E.N.

Martine is a Wexner Heritage graduate. She was a recipient of UJC’s Jesselson Young Leadership Award, the Kipnis-Wilson/Friedland Lion of Judah award and co-chaired UJA Federation of NY’s Rosenwald 90th Anniversary Mission to Israel. Martine currently serves as President of Hillels of Westchester. She is an active member of the National Board of Governors of American Jewish Committee, and a Board member of its Westchester chapter. An advocate for Israel experiences, Martine has served on the MASA North American committee, currently serves on the Taglit Birthright Westchester council. Martine serves on the board of the Jewish Education project where she is a true proponent of Jewish formal and informal education and is a Trustee at the Solomon Schechter School of Westchester. She is a committee member since February 2012.