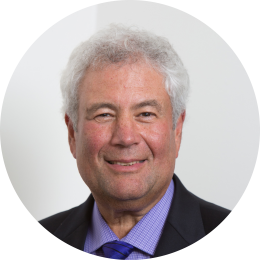 Mark Sokoll is a lifelong Jewish community advocate, activist and educator. Since 1988 he has held several posts at the JCC, including Director of Jewish Resources and Executive Director; he became President/CEO in 2000. Prior to his tenure at the JCCGB, Mark was a Senior Educator at Alexander Muss High School in Israel and also worked as a licensed tour guide. During his service in the Israel Defense Forces, he served as an educator at the IDF Institute for Officer Training and Education.

He is a past Chair of the Board of Directors of the Lenny Zakim Fund, a nonprofit foundation that funds Greater Boston grassroots organizations involved in building a better society for all. He has been honored by Mayyim Hayyim and is a past recipient of the Myrtle Wreath Award from Hadassah; the Lester Gilson Award from the Solomon Schechter Day School; and the Bernard Reisman Award from the Hornstein Program at Brandeis University.

A graduate of Boston University, Mark earned his Master of Arts in Near Eastern and Judaic Studies from Brandeis University and received Rabbinic ordination from the Bet Din-Bet Achim in New York City. He stepped down from a part-time position at Temple B’nai Israel in Revere, Massachusetts in 2010.