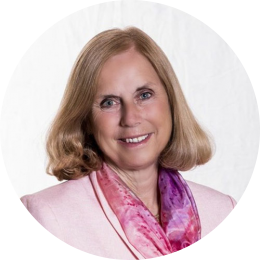 Margaret was born in Monrovia, California and resided in a number of different states during her life before settling here in the San Gabriel Valley in 1985.  She and her husband of 37 years, Brad, have raised their 5 children here since that time.  All five of their children, Megan, James, Ian, Alana and Evan, have attended Duarte public schools. They all have graduated from Duarte High School and have gone on to graduate from four-year universities, with some of them returning to the Los Angeles area to pursue graduate schools.  Margaret’s parents, Ed and Helen Ferguson, also live in Duarte, as do several of her children.  Margaret and Brad's grandchildren also attend the Duarte Public Schools.
Margaret has a Bachelor’s Degree in marketing from St. Mary’s College at Notre Dame, in Indiana.  Her Masters Degree is in Public Administration from Cal State Long Beach, where she has been an adjunct professor in the graduate school in Public Policy.
Margaret has been a member of the Duarte City Council since 1990 and has served as Mayor of Duarte five times.  She is currently serving as the Mayor of Duarte.  She began her community service career working in the local PTAs where she has been President of both local and district units.  She also has served as President of the Duarte Education Foundation for over 20 years, which exists solely to raise money to improve the lives of all students attending Duarte public schools, as well as citizens of the community.  The Foundation has raised over a million dollars in that time to benefit the schools, and is currently working to raise $100,000 this year to start a music program in the elementary schools.  That program will start in fall of 2013.  The Duarte Education Foundation also gives away thousands of dollars in scholarship money every year, as well as supporting Wishing Well Grants for teachers.
Over the past 23 years that Margaret has served on the City Council, she has been elected by her peers in other cities to serve on many regional, state and national boards, such as the National League of Cities, League of California Cities, Liability Trust Fund Oversight Committee, California Joint Powers Insurance Authority, Personnel Committee of the Sanitation Districts, Southern California Association of Governments District Representative, and LAFCO Representative for Los Angeles County. She also was the President of the California Contract Cities Association.

Locally she continues to lead the fight for cleaner air in cities along the foothills by promoting air quality monitoring stations for the region.  Margaret also has monthly meetings with citizens in her Bike Ride with the Mayor program on the 2nd Saturday of each month.  Margaret is an advocate for good health and has worked with the city over the years to implement the Biggest Loser Contest and the Duarte Walking Club.

Lowering the crime rate in Duarte has been of utmost importance to Margaret.  Since 2009, Part One crimes in Duarte have decreased by 24%, making Duarte's crime rate lower than surrounding foothill cities in the San Gabriel Valley (Monrovia, Arcadia and Glendora).  Attracting business to our city has also been an important component of Margaret's city council tenure, culminating in the City of Duarte being named the 2012 Most Business Friendly City in Los Angeles County by the Los Angeles County Economic Development Corporation.  These are some of the many reasons that Margaret calls Duarte "Our Kind of Town".