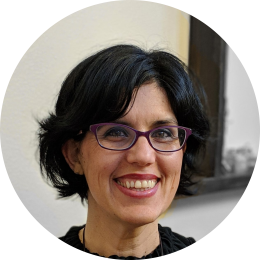 Lilach Berko-Aisemberg was born in Moshav Aviel in June 1979 to a mother from Brazil and to a father who is the son of Holocaust survivors from Romania. Between October 1997 and December 1999, she served in the army for two years and two months as a social worker in a classified battalion. After her military service, she studied architecture and interior design at the College of Management and towards the end of her studies in June 2006, her eldest daughter Yuval was born, and her life changed. She decided to concentrate on raising her daughter in the first year, during which she visited the Developmental Counseling Department for babies once a week.

During this year, she concluded that what she really wanted to do in life was to accompany parents and babies during their developmental stages from birth to walking. This was due to her personal and positive experience as a mother, as opposed to her friends who did not always experience the same support and experience as mothers.

The understanding that grew within her that the initial stage of life, just like in the structure, is the most important element to the continuation. This is what caused her to give up the final project of architectural studies that she so loved and went on to learn development for babies.

In May 2008, she graduated from the Infant Development Instructor and a month earlier gave birth to her second child, Alon. In parallel, she opened a studio in Moshav Aviel and raised her son with the help of her mother. Lilach is very involved in the Israeli community in various fields. Two years ago, in October 2016, she became a member of Noffar Sholder Heissler and since then they have been running a Facebook group called Siri Lida in Seattle. The group was established with the understanding that mothers live far from their families in the U.S. and the need for postnatal assistance is enormous with most families living in Israel who cannot come and support the mother. The group is based on women volunteers from the Israeli community in Seattle who cook hot and domestic meals twice a week for six weeks during the first three months when no family help comes from Israel. The project has already supported 40 mothers since its establishment and is a prominent figure in the Israeli community in Seattle.

During Lilach’s years in Israel, she took courses on baby massage and baby yoga. In April 2012, she moved with her family to Seattle following her husband's work at Microsoft, and not long ago joined the family of her youngest daughter Noga in June 2013.

In 2015, after spending two years with her daughter at home, she decided to officially reopen a baby development studio in her home and return to her love, support and guidance of parents and babies.

Since then she has not stopped enriching herself and her knowledge for her clients and takes various courses. One of which is about guidance for mothers and babies based on mindfulness (Listening Mothers) by Yaffa Mintz, a woman she admires and sees as a role model. Over the years, Lilach has developed a parenting system that teaches parents how to help their children achieve self-confidence and problem-solving independence. Lilach uses this in her private life and with her clients "to teach, to accompany, to challenge."