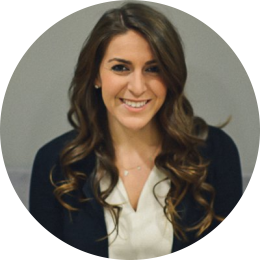 Julia Ben Shalom has been serving the Jewish community for over a decade and has dedicated her life to working for a secure State of Israel that is recognized for its achievements and contributions to the modern world.

Julia made Aliyah after graduating from her undergraduate studies at Syracuse University's Maxwell School of Citizenship and Diplomacy. She earned her Masters degree in Counter Terrorism and Conflict Resolution at the IDC Herzliya with Honors. Her thesis entitled "Modifying International Law to Reflect Modern Day Warfare, the Case Study of Israel" examined the protection of civilians in wartime using Israel's 1st and 2nd Lebanon Wars and Operation Case Lead as a case study. After graduation, Julia worked as an Analyst at the International Institute for Counter-Terrorism in Herzliya where she founded Women in International Security Israel, a non-profit student organization assisting young women in the field to advance their careers. She still serves on the advisory board of the organization.

Although working in the security field in Israel was a once in a lifetime experience, Julia learned by living there that there was so much more to Israel than what she had been exposed to in her Jewish upbringing in the United States. After meeting Joanna Landau, CEO and Founder of Vibe Israel in 2013, Julia was inspired by the organization’s vision to create a world where hundreds of millions of Millennials view Israel positively and are inspired by its contributions and competitive advantages. In such a world, Jewish Millennials will develop a newfound appreciation of Israel, and in turn, for their own Jewish identity, and Israel advocacy efforts will be more effective.

Julia joined the organization as the Director of Development. Since then, she has helped Vibe Israel grow to 10 times its original size and opened the Vibe Israel USA office in 2015 after relocating with her family to New York. Vibe Israel today is actively engaging Millennials with Israel and inspiring them to share Israel’s story of creativity, innovation, and multiculturalism with rapid plans of expansion. The organization to date has generated over 120 positive mentions of Israel online in the past 7 years. She now serves the organization as the Executive Director of Vibe Israel USA and as the Vice President of the Board of Directors.

Julia holds a BA from Syracuse University's Maxwell School of Citizenship and Diplomacy where she graduated with Honors and spent a semester working as a legal aid at the European Court of Human Rights in Strasbourg, France. She also holds an MA from the IDC Herzliya in Counter-Terrorism and Homeland Security also with honors. She is fluent in English, French, and Hebrew.