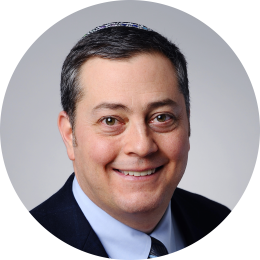 Jeremy joined the Foundation for Jewish Camp as CEO in 2010.  Prior to joining FJC, he had a highly-regarded 20+ year career in Consumer Packaged Goods, beginning at General Mills, Inc, then at Campbell Soup Company, where he served as President of its largest Division, US Soup.  In 2005, he was recruited to serve as CEO of Manischewitz.

Jeremy spent many wonderful summers at Camp Ramah in Wisconsin as a child where he discovered the joy of Judaism and made lifelong friends.  He started his Jewish communal work in high school, serving as international president of United Synagogue Youth.  He since served on many philanthropic boards including Jewish Federation, Israel Bonds, American Friends of Magen David Adom, and currently serves as vice-president of his synagogue, Congregation Ahavath Torah.

He received a Bachelor of Arts degree in English Literature from Columbia University and an M.B.A. in General Management from Harvard Business School.  He lives in Englewood, NJ with his wife, Gail, and two children, Zalman and Esther.