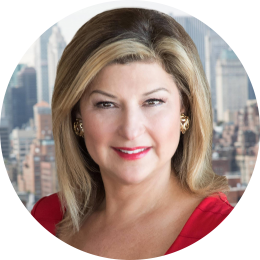 B)  A loving mother

C)  A former sergeant in the Israel Defense Forces

E)  All of the above

If you answered “E,” you would only be partially right. Because while Jacky is all of the above, she is also much more. Born in Santiago, Chile, and raised in Israel, where she served as a sergeant in the Israel Defense Forces, Jacky emerged from humble beginnings but rose through the ranks to become the strong, talented and determined woman she is today. Jacky worked as a managing director for a multinational firm in Spain before finding her true passion: real estate. Her business acumen and global experience fit perfectly with her chosen career and helped her assist a vast array of clientele.

Success came naturally. Jacky was named “Rookie of the Year” by MLB Kaye, then, soon after, The Corcoran Group came calling, and she was always among their top 25 producers. Jacky received a personal invitation from Chairman Howard Lorber and CEO Dottie Herman to join Douglas Elliman Real Estate, where she has been since 2003. Jacky was one of the very first in New York City residential real estate to successfully launch the team concept and, under her guidance, the Jacky Teplitzky team is consistently ranked among Douglas Elliman’s top 10 producers. In fact, they have sold more than $1 billion in New York and Miami properties.

Fluent in English, Spanish and Hebrew, Jacky’s diverse background is one of the reasons she connects so readily with clients and gets them to the closing table, whether they hail from the U.S., South America, Europe or Russia. She understands and respects the unique differences of each country and each culture (yes, an Argentinean is different from a Colombian, who is different from a Chilean or a Russian) and addresses the individual needs and wants of her domestic and international clientele. She also assists investors and manages their properties.

Jacky’s clients appreciate her no-stones-left-unturned approach. She works with a variety of professionals, including an office manager, graphic artist, a privately hired business consultant and a public relations agency, to ensure she meets – and exceeds –clients’ needs. She and her team’s brokers are well versed in every Manhattan and Miami neighborhood and property type. Clients benefit from the team’s synchronicity. Jacky is regularly called upon by local and national media to speak about real estate. You may have seen her on TV (Fox Business, “Good Morning, America,” CNBC, NY1 News, CNN en Español and Bloomberg TV), in print (The New York Times, The Wall Street Journal, The New York Post, The Real Deal) or online (Univision.com, curbed.com, Reuters.com). Jacky is a recognized speaker and coach, leading seminars at The Real Estate Board of New York (her classes are credit-approved, as she is a certified instructor by the New York Department of State), Yeshiva University, Barnard College, Inman Connect, the Florida Realtors® Convention & Trade Expo (where she was a keynoter), Citibank Private Banking, New York University, Baruch College, the 92nd Street Y (where she has presented for six consecutive years), Israel Bonds and the Private Wealth Latin America & Caribbean Forum.

As busy as she is, Jacky always finds time to give back. She is a noted philanthropist and an active supporter of UJA-Federation of New York, where she sits on the board of directors, is part of the Jewish Federations’ Lions of Judah and Women’s Executive Circle and vice chairs its Professional Women’s Philanthropy division. She is also a New York regionalcouncil member of the Israeli-American Council.

Jacky also dedicates her time to WIZO, which provides for the welfare of women, children and the elderly. Jacky’s down time is spent with her two sons. As a family, they took part in several fundraisers to support Chilean earthquake victims and have collected and distributed pajamas as part of their relationship with the Pajama Program, a charity that provides sleepwear to children in need. She is the proud mom of an Emerson College graduate, and a sophomore at TheUniversity of Edinburgh in Scotland. She is also an active member of Park Avenue Synagogue.  If you want to work with a broker who will give you 110 percent, from that very first connection right on through to closing, give Jacky a call at (212) 891-7263 or email her at [email protected]. Rest assured, she’ll put her resources and expertise to work to get your deal done!