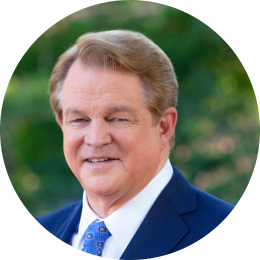 The son of Pat and Dede Robertson, Gordon graduated from Yale University in 1980 and earned his Juris Doctor degree from Washington and Lee University in 1984. He practiced law in Norfolk, Virginia, for 10 years.

In 1994, Gordon moved to the Philippines and founded CBN Asia. In 1995, he also founded the Asian Center for Missions (ACM), dedicated to training and sending Asian missionaries throughout the world. ACM is now the largest missionary agency in the Philippines with more than 2,000 graduates trained in cross-cultural missions.  In 1996, Gordon started CBN Asia’s flagship television show, The 700 Club Asia, which is now one of the longest-running Christian television shows in the Philippines and is distributed by satellite around the world.  Also in 1996, CBN Asia started a humanitarian organization, Operation Blessing Philippines, which has been recognized as “NGO of the Year” by the Philippine government.

Following the model created in Manila, Gordon started CBN/Operation Blessing centers in Indonesia, India, Thailand, Hong Kong, and Beijing in 1998 and 1999. After those centers successfully launched, Gordon returned to the USA in 1999. He now co-hosts CBN’s original flagship program The 700 Club, as well as 700 Club Interactive, a daily show airing on ABC Family Channel.  Gordon oversees all aspects of programming for the ministry in both television and on the Internet.

Gordon is also the executive producer of Superbook, the reimagined animation series, whose mission is to bring the stories of the Bible to the children of the world. The new Superbook has been broadcast to 187 million viewers in 93 countries.

Gordon has also produced award-winning special programs such as Temple of Heaven, filmed in Beijing, China, in 2002; the three-time Emmy-nominated documentary Made in Israel in 2013; The Hope: The Rebirth of Israel in 2015 and In Our Hands-The Battle for Jerusalem in 2016.

Gordon and his wife, Katharyn, reside in Virginia with their three children.