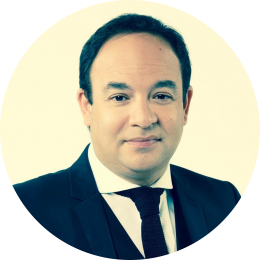 Frank Melloul serves as the founder and CEO of the international news channel i24news. Before doing Alya and creating the channel, Melloul`s career was deeply rooted in France by merging wide knowledge and experience in public service as well as the private sector.

Melloul served as Executive VP of Strategy, Development, and Public Affairs of the holding company, "Audiovisuel Exterieur", a governmental French organization that combines TV, Radio, and Digital (2009-2012).  In 2009, he was appointed Chief of Staff at the Cabinet of the French Secretary of State for the European Affairs setting up the ministerial strategy roadmap. He also was advisor for Public Diplomacy of the French Special Representative for AFPAK (Afghanistan - Pakistan).

Melloul was appointed Strategy and International Development Director at the international news channel France 24 (2007- 2009). He was Advisor to the Prime Minister and Deputy Head of the Prime Minister’s press office (2005-2007); Advisor for press and communications at the offices of the Interior Minister (2004 - 2005); Deputy Spokesman for foreign affairs (2003-2004); Advisor in charge of press relations at the offices of the Deputy European Affairs minister (2002-2003); Project leader for the director of strategic affairs, and security and disarmament at the French Foreign Ministry (2001-2002).