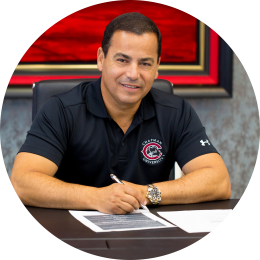 On September 16, 1966 David Vered was born to his two loving parents, Haim and Gisele Vered. After serving in the Israeli Defense Forces for three years, he decided to follow his dreams and pursue a career in fashion in America. The day he completed his service, Vered was on the first flight to Los Angeles. In 1988, he delved into the retail and wholesale fashion business, opening retail stores in the Los Angeles fashion district and building crucial relationships with fashion industry executives.

In 2000, there was a boom in premium denim brands such as, 7 For All Mankind and True Religion in the contemporary category. When Vered saw a gap in the market for premium denim in the junior category, he took the opportunistic leap to enter the denim industry and create YMI Jeanswear. Upon opening his first headquarters in the fashion district of Los Angeles, the brand quickly gained recognition and began entering the doors of national department stores such as, Nordstrom, Dillards, Stage and Belk, to name a few. On the journey to his entrepreneurial lifestyle, Vered took an interest in the development of downtown Los Angeles and the up and coming Arts District. In 2010, he custom built one of the largest fashion headquarters in the emerging Boyle Heights District, with a state of the art 160,000 sq facility. Today, YMI Jeanswear has become the most recognized marketed junior denim brands, retailing in over three thousand boutique stores, specialty retailers and department stores. As a leading fashion company, YMI Jeanswear has expanded its horizons with multiple denim category offerings with brands such as Royalty for Me (Missy) and the newest denim line “Secrets by David Vered”.

In the midst of building his fashion empire, Vered met his greatest love—his wife, Esther Vered at a wedding. After a slow dance, he learned that they were born on the same day, of the same month, of the same year, with only an hour apart on opposite sides of the world, and knew that she was his destiny. With time, the loving couple had four children—their priority above all else, a quality he inherited from his parents. Vered is a dedicated supporter of various charitable organizations such as St. Jude Children’s Research Hospital, Birthright, Stand By Me, and National Jewish Health. His passion and inspiration also led him to create Los Angeles branch of Lehosheet Yad, an Israeli organization supporting cancer‐stricken children, in honor of his eldest son, which sends a group of sick children to Los Angeles on an annual dream tip.

When Vered is not traveling the world for business, he enjoys his free time as a season ticket holder supporting a variety of his Los Angeles sports teams such as the Lakers, Clippers, Chargers, Rams, USC, and the new Los Angeles Football Club. You can catch him fine‐dining or experiencing the roaring nightlife at all of L.A.’s premier hot spots with colleagues, friends, and family.