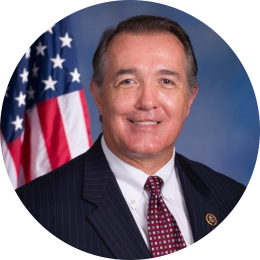 Congressman Trent Franks is a conservative, Reagan Republican, and is currently serving in his seventh term in the United States Congress. Trent serves on the House Judiciary Committee where he is Chairman of the Subcommittee on the Constitution and Civil Justice. He is a member of the House Armed Services Committee, serving as the Vice-Chair of the Subcommittee on Emerging Threats and Capabilities and a member of the Strategic Forces Subcommittee. Trent Co-Chairs the Orphans and Vulnerable Children Caucus as well as the Congressional Caucus on Adoption and the International Religious Freedom Caucus.

He is the Chairman of the National Security Working Group for the Republican Study Committee, taking the lead among the conservative members of Congress on issues relating to national security. Trent co-chairs both the Missile Defense and the Electromagnetic Pulse Caucuses; he leads efforts to reduce national security vulnerabilities in our electric energy grids and to increase America’s missile defense capability against all enemy missile threats including those potentially launched by jihadists seeking to bring nuclear terrorism to America. Trent firmly believes the foremost responsibility of our federal government is to provide for our nation’s common defense. He is also a staunch advocate of Israel, serving as the co-chairman of the Congressional Israel Allies Caucus.

Trent has spent most of his life working on children’s issues and trying to build a better future for all children. Trent was the author and principal proponent of the Scholarship Tax Credit which was upheld in the Landmark Supreme Court decision Arizona Christian School Tuition Organization v. Winn in 2011. This policy is now in nine states and has provided billions of dollars from the private sector for hundreds of thousands of scholarships to provide a better education for American children.

Before he was elected to Congress, Trent served in the Arizona Legislature as Chairman of the Subcommittee on Child Protection and Family Preservation where he was a prime sponsor of nationally recognized bills designed to protect children and the family, including the “Child Obscenity and Pornography Bill” (which survived major challenges in the U.S. Federal District Court) and the “Dangerous Crimes Against Children Bill” which gave Arizona the strongest child protection laws in the nation.

Trent was later tasked by the Governor of Arizona to provide oversight for all of Arizona’s state programs for children when he became the Cabinet level Director of the Arizona Governor’s Office for Children. He also served as Chairman of the Arizona State Children’s Cabinet as well as Chairman of the Inter-Agency Study Committee on Children and AIDS.Trent founded and served four and a half years as Executive Director of the Arizona Family Research Institute which is a non-profit organization associated with Dr. James Dobson’s “Focus on the Family” for the purpose of advocating and advancing public policy to protect children and families in Arizona. Trent and his wife Josephine worked as Sunday School teachers for the one and two year olds in their Church Preschool Department for nearly 22 years. Because of his lifelong commitment to Children and Children’s issues, Trent was nominated “Children’s Champion” by Arizona State Legislators.

Trent is a rare leader who still believes that people and principles should be at the center of political discourse in America. Trent believes the purpose of government is to protect the lives and Constitutional rights of the people. He works very hard in Congress for smaller government by cutting government waste, taxes, bureaucracy, and regulation. He believes in personal responsibility, strong national defense, free enterprise, protecting the innocent, and in the timeless truths and principles of the United States Constitution.  Prior to coming to Congress, Trent was a small business owner. After struggling to have children of their own for more than two decades, Trent and his wife Josie are now the deeply grateful parents of two precious Gifts of God; eight-year-old twins, Joshua Lane and Emily Grace.