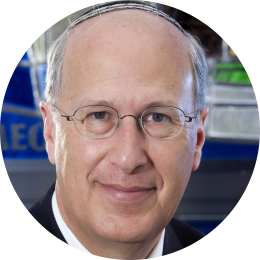 Dr. Bruce Powell is founder and current Head of School of the de Toledo High School (dTHS), formerly New Community Jewish High School, in West Hills, California.  In addition to founding dTHS, he has helped to found, develop, and lead two other Jewish high schools in the Los Angeles area over the past 37 years including the Milken Community High School, and Yeshiva University of Los Angeles High School. He has also consulted on the development of 23 Jewish high schools in cities throughout the United States.

Dr. Powell holds a Ph.D. in Education from the University of Southern California, and has won both the Milken Family Foundation Jewish Educator Award (2005) and the Covenant Award (2008) for his contributions to Jewish education.  Most importantly, Dr. Powell has four adult children with his wife, Deborah, and they have personally invested 52 “child” years in Jewish day school education.