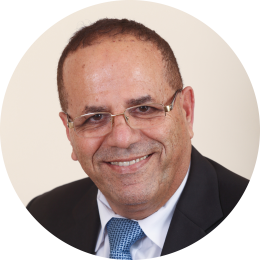 Kara was born in Daliyat al-Karmel, a Druze town near Haifa, in 1955. He went to an agricultural high school in Kfar Galim. He served in the Israel Defense Forces reserve and attained the rank of major. Serving alongside Jews before and after the establishment of Israel has been a source of family pride; his uncle was killed during the Arab revolt in 1939 and his father served in the IDF during the 1948 Arab–Israeli War. Another uncle was also killed by Arabs then and two of his brothers were killed in action in the 1982 Lebanon War. Following his national service, Kara studied Business Administration. Today, he lives in Daliyat al-Karmel with his wife and five children.

As Deputy Minister, Kara cited demographic issues as a growing threat to Israel. He promoted development of the two regions to encourage Jews to stay and work there. He worked to help former soldiers to study for free at colleges in the Negev and Galilee, as well as a new college of medicine in the latter. In addition, he promoted a program in Knesset to train Druze firefighters that will serve in Jewish towns in the West Bank. Later, with Kara's help, ZAKA volunteers began to establish volunteer rescue services in northern Druze and Arab towns in September 2010, starting with Beit Jann and Yirka.
Kara met with Turkish ambassador to Israel, Ahmet Oğuz Çelikkol, to improve Israel– Turkey relations, citing Turkey as a "proven" friend to Israel. However, relations deteriorated after the Gaza flotilla raid. Kara has also been instrumental in improving relations with Syria and Lebanon.  For much of 2010, he has worked to improve economic and humanitarian ties between Israel and Syria. Druze farmers in the Golan now import water from Syria and export thousands of tons of apples every year. In addition, Druze have been able to visit relatives in Syria for the first time in decades and also receive organ transplants there. In addition, he has coordinated burials for families between Syria, Lebanon, and the Golan.Kara is hopeful that these "cracks in the great wall between Israel and Syria" will one day lead to real negotiations for peace. Or at the very least, he hopes to cut down the bureaucracy preventing humanitarian exchanges between Israel and Syria.Kara has also called for mines to be removed from the Golan, citing them as dangerous to travelers and not needed for Israel's defense.

The head of a South Sudan delegation to a February 2011 meeting of a new organization to develop Nigeria, Suleiman Alhariri, invited Kara to the newly forming country to help begin setting up diplomatic relations. Kara led a delegation of Jewish, Muslim, Druze, and Christian religious leaders to discuss interfaith relations in Istanbul with TV show host Adnan Oktar. The delegation presented a list of Jewish religious sites in Syria for the opposition in the Syrian Civil War to guard, should unrest threaten the sites. The group planned to set up a religious court to arbitrate regional disputes. Kara also said Turkey is eager to reestablish its ties with Israel. In May 2011, Kara claimed that the opposition movement in the Syrian Civil War had approached him to seek help for their movement from the United Nations, United States, and European Union.