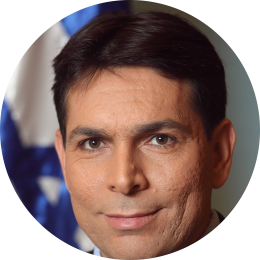 Israel's Ambassador to the United Nations

With over twenty years of experience representing Israel overseas and within the Israeli public system, Mr. Danon has developed a reputation as one of Israel’s most ardent defenders.

Prior to assuming his role as Ambassador, Mr. Danon served as Israel’s Minister of Science, Technology and Space. In this role he expanded international cooperation and investment in the fields of science and technology and promoted increased access of women and minority groups to science, technology and academic institutions. In 2015, Mr. Danon was also a third-term member of the Knesset.

Between 2013 and 2014, Mr. Danon served as Deputy Defense Minister, heading both the Social Welfare Division and the Reserves Division.

Throughout his first term in Knesset, from 2009-2012, Mr. Danon served as Deputy Speaker of the Knesset chairing several committees and Caucuses including the Committee on the Rights of Children; the Committee on Immigration, Absorption and Diaspora Affairs; and the Caucus for IDF Widows and Orphans. He simultaneously sat as a member of the Foreign Affairs and Defense, Economic Affairs, Education, Constitution and Women’s Rights Committees.

A Lieutenant in Reserves for the IDF, Mr. Danon holds a Master Degree in Public Policy from the Hebrew University of Jerusalem and a Bachelor Degree in International Relations from Florida International University, for which he received Honors.

Ambassador Danon has contributed to leading publications including The New York Times, LA Times, USA Today, and Foreign Policy and has made regular appearances in international media outlets including CNN, Fox News, MSNBC, and BBC.

He is married to Talie with whom he has three children, Aviad, Hila, and Shira.