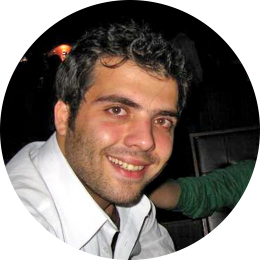 Ahed Al Hendi is a dissident who fled Syria four years ago. As a student, he was imprisoned and tortured by Syrian authorities for establishing a secular anti-regime student organization. He is now the Arabic Programs Coordinator at CyberDissidents.org, a New York-based human rights organization that amplifies the voices of pro-democracy bloggers in the Middle East. Al Hendi was elected as one of nine executive officers of the Antalya Conference held in Turkey. He has held meetings with many members of Congress in order to highlight human rights abuses in his home country. He has also met with the secretary of State Hillary Clinton, and with John Baird the Canadian foreign affair minister in order to highlight the abuses of human rights in Syria. Al Hendi is in touch with a wide network of activists in Syria every day and writes frequently about democracy in the Middle East.

In the past, Al Hendi has worked with the Samir Kassir Foundation in Lebanon as its Syrian researcher. He has been interviewed by leading American journalistic organizations like The Wall Street Journal, The New York Times, and The Washington Post. His articles have been published in The Wall Street Journal, Foreign Affairs, The Daily Beast, and Reuters, and in Arabic dailies like Al Mustaqbal. Al Hendi was interviewed by Arabic channels such as Al Huraa, Russia Today Arabic, and Sawa and has also appeared on Bloomberg and Al Jazeera English.