Trump deserves our thanks as Americans, Israelis and Jews 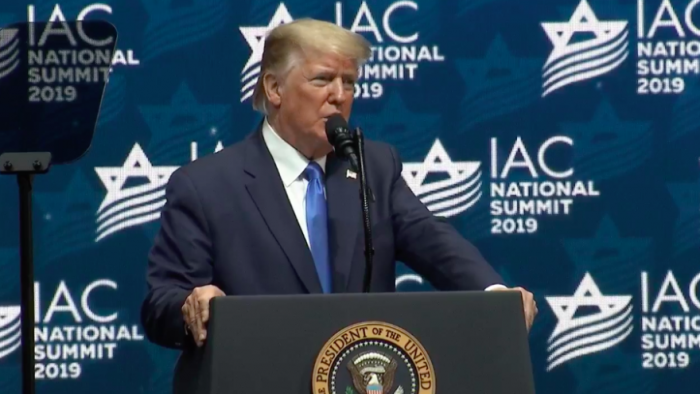 (December 11, 2019 / JNS) The following is the prepared text of Dr. Miriam Adelson’s introduction of President Donald J. Trump at the Israeli American Council National Summit in Hollywood, Florida on Dec. 7, 2019:

Shalom, dear friends. And thank you!

Thank you all so much for coming together for another terrific national IAC event. And thank you, as always, for defending and promoting Israel, the United States and their eternal alliance. Thank you, left-wingers, and thank you, right-wingers. Thank you, liberals, and thank you, conservatives. Thank you for putting your differences aside and uniting for the sake of Jewish survival, of sound American foreign policy, and of Western civilization.

“Thank you” — that’s a special phrase, isn’t it? We say it a dozen times a day. But how often do we really mean it? As Jews, we should. As a people who have suffered countless tragedies, we know how to appreciate and celebrate the good things in life. Gratitude is literally written into our Jewish identity.

In the Book of Genesis—”Sefer Bereshit”—when our foremother Leah gives birth to her last son, she says: “‘This time I will give thanks to the Lord’; therefore she called his name, Yehuda.” It is because of Yehuda that we Jews are named “yehudim” in Hebrew. And it is in the spirit of Yehuda that we give thanks for kinship, for friendship, for courage, for the triumph of truth.

Ladies and gentlemen, our keynote speaker today represents all of these things. He is Donald J. Trump: the 45th president of the United States, and the No. 1 friend of the State of Israel!

Perhaps more than anyone in today’s hectic and divided world, President Trump deserves our gratitude—as proud Israelis, as proud Americans, and as proud Jews, no matter what our politics are.

Where his predecessors faltered, this president has delivered, by finally recognizing Jerusalem as Israel’s eternal and beloved capital and moving the U.S. Embassy there. Where his predecessors shut their eyes to reality, this president has demonstrated strategic vision, by recognizing the Golan Heights as Israel’s sovereign territory. And, just last month, his administration again made history by declaring that there is nothing wrong—and everything right—about Jews living anywhere in the ancient Jewish homeland.

President Trump has shown global leadership in the face of evil, by withdrawing from the disastrous nuclear deal with Iran and increasing sanctions against it.

And he has always—always—backed Israel and the Jewish people.

President Trump knows that America stands tallest when it stands with its true friends and allies. He knows that Israel’s interests are U.S. interests, and that when one of these nations becomes great again, so too does the other. He knows that the Red-White-and-Blue looks terrific flying alongside the Blue-and-White —  Stars and Stripes alongside the Star of David!

We owe President Trump our sincere and heartfelt thanks—without apology or hesitation. That’s what it means to have a common cause and a shared destiny. Anyone who has been in Israel during a war knows that when the air-raid sirens sound, superficial differences between people immediately vanish. Religious or secular, Likud or Blue and White, Israelis offer each other—total strangers—shelter in their homes, or rides to safety in their cars.

Our enemies’ weapons do not discriminate among Israelis. And our friends—our real friends—do not discriminate between the “right” or “wrong” time to support Israel, or the “right” or “wrong” Israeli government to engage with. We must embrace such friends. And the greatest of them is right here, with us: President Trump. The gratitude we owe him is above partisan politics. It is a duty we must feel in our souls, that speaks to the very heart of our existence.

President Trump has already gone down in the annals of Jewish history — and that is before he has even completed his first term in office!