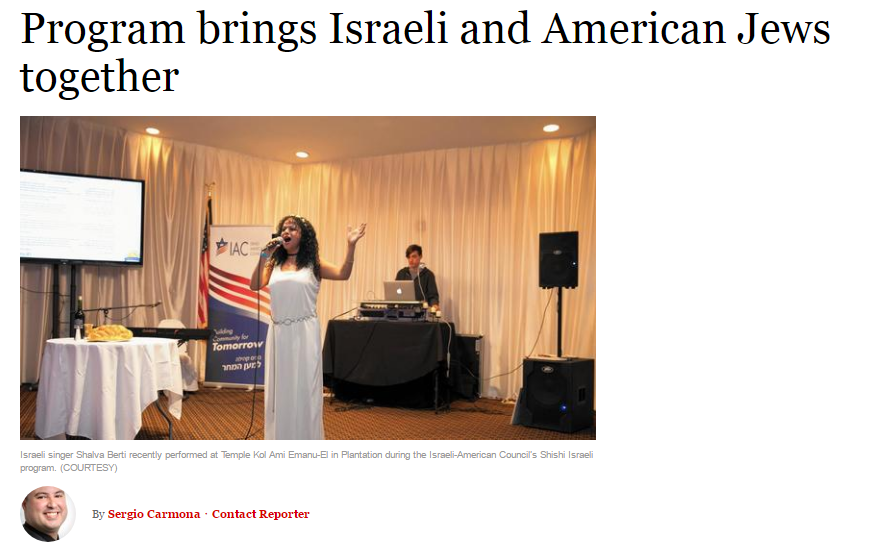 This event was part of the Israeli-American Council Shishi Israeli program. The aim of this program is to bring together Israeli-American and Jewish American families of all ages and backgrounds to celebrate their shared culture and heritage.

Four regions — Nevada, Arizona, Florida and New York — hosted the Shishi program on a recent Friday night with the intention of building a Jewish communal experience that bridges historical and geographical gaps across the American Jewish landscape. Florida was represented by Temple Kol Ami Emanu-El when the synagogue hosted Berti.

"There were many families with kids of all ages and there was a mix of the Israeli community and Jewish American community."

"She sang "Yerushalayim Shel Zahav" (Jerusalem of Gold) so amazingly," she said. "She caused everybody to have tears with the way that she sang it."

"She did a very nice job and it was an added value to the Friday night service."

Weiss said that this sold-out event is a very good one for the community.

"It's always good to have a sold out event and it makes people want to do it more often."

Weiss noted that the synagogue's goals for the event were, "To make sure that we have a strong Jewish American community involved in the Shishi Israel program."

"We accomplished that," he added. I think it was the largest gathering that the IAC had in South Florida of the American Jewish community."

Feigelman explained the IAC's goals for the Shishi Israeli program.

Feigelman continued, "It's also a very nice engagement between the Israeli community and the Jewish community."

"We're all Jewish, but there's not yet such a perfect bond between the two communities and this event is doing it beautifully."

A Shishi Israeli Dinner is scheduled to take place at Temple Beth El in West Palm Beach on March 31 starting at 6:30 p.m. Visit israeliamerican.org/florida to register or for more information. Space is limited so try to register as soon as possible.