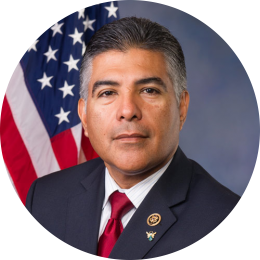 Rep. Cárdenas was first elected to the United States House of Representatives in 2013 for the 113th Congress (2013-2014) and has represented California’s 29th district since. Now in the 114th Congress (2015-2016), Rep. Cárdenas sits on the prestigious House Committee on Energy and Commerce, which he was elected to in his first term. The Committee on Energy and Commerce is the oldest of the "authorizing" committees in the House. In addition to being a member of Congress’s most established committee, Rep. Cárdenas is a member of House Democratic Leadership, working with House Minority Whip Steny Hoyer as an Assistant Whip.

While only serving in Congress for two terms, Rep. Cárdenas has committed to bringing awareness and change to the issues most important to the San Fernando Valley and its families. He has been recognized locally and nationally for his stance on common sense gun reform, juvenile justice, and championing solutions that will make the U.S. economy even stronger to bring better-paying jobs to the American people.

Rep. Cárdenas has been a steadfast champion and noted for introducing HR 5100, or the At-Risk Youth Medicaid Protection Act of 2016, during his second term in office. The resolution acted as an extension of his work within the bipartisan Crime Prevention and Youth Development Caucus, which he co-founded along with Rep. David Reichert of Washington during the 113th Congress.  During the 113th Congress, Rep. Cárdenas also founded the bipartisan Congressional Student-Athlete Protection Caucus along with Rep. Charlie Dent of Pennsylvania, underscoring his dedication to fostering America’s youth through bicameral support.

Before representing California’s 29th district in Congress, Rep. Cárdenas was first elected to the California State Assembly in 1996. He went on to serve three terms in the assembly and was later elected to the Los Angeles City Council, in 2003. An engineering degree and a business background prepared him for the day-to-day duties of an elected official, while his experience allowed him to find practical and realistic solutions to difficult problems.