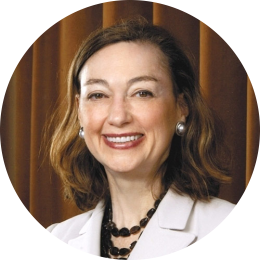 Dr. Janice Weinman Shorenstein, born in London and a resident of New York City, currently serves as ED/CEO of Hadassah, an organization comprised of over 300,000 members, donors and supporters with nearly 700 chapters around the United States. The organization owns the Hadassah Medical Organization in Israel and offers programs on healthcare, leadership development and advocacy in the U.S.

Immediately prior to coming to Hadassah, she was the President of Kids In Distressed Situations, Inc. (K.I.D.S.). K.I.D.S is an international charity that annually provides new products to approximately 40 million children in need around the U.S. and the world.  Previously, she served as Corporate Vice President for External Affairs at Mount Sinai-N.Y.U. Medical Center, where she oversaw marketing, communications, PR, and government and community relations for the five hospitals of the merged entity.  Before that she served as Assistant to the U.S. Secretary of Education during the Clinton Administration. Prior to that, she was the Executive Director of the American Association of University Women, the national organization that promotes education and equity for women and girls.

Before her appointment to AAUW, Janice was the Executive Vice President at the College Board, a national non-profit association of some 3,000 colleges, secondary schools, school systems, educational associations, and agencies best known for its services to aid students in transition from high school to college. There, she oversaw all programs and field offices for the organization.

Janice has led and participated in numerous women’s and civic groups at the national, state, and local level.  She was Chair of the Women’s Leadership Board at the John F. Kennedy School of Government at Harvard University, and served as the lay president of the Jewish Community Relations Council of New York.  She was the Chairman of Women for Women, a group of Jewish women who serve as resources to the wives of U.N. Ambassadors; and New York Chair of JAC PAC, a national Jewish women’s group working with Congress for strong U.S./Israel relations. She also served on the initial Board of the Hadassah Foundation. Dr. Weinman has been extensively involved in local, state and national politics since 1980.

Janice served on the Visiting Committee of the Harvard Graduate School of Education, where she received her Masters and Doctoral degrees. She has published numerous articles and monographs on educational reform, school practice, organizational development, and equity.  She is married to Stuart Shorenstein, an attorney in New York, and is the mother of one daughter, Marissa, and grandmother of two grandchildren, Odin and Malina.