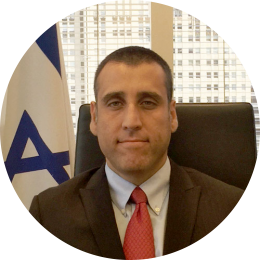 Aviv Ezra currently serves as the Consul General of Israel to the Midwest, based in Chicago. He is the official representative of the state of Israel in Illinois, Indiana, Iowa, Michigan, Minnesota, Nebraska, North Dakota, South Dakota, and Wisconsin.

Prior to his appointment as Consul General, Mr. Ezra quarterbacked the relationship of Israel with the United States Congress for a period of 8 years. For the past 3 years he has served as the Director for Congressional Affairs at the Israeli Ministry of Foreign Affairs in Jerusalem. This was preceded by a 5-year period of service as the Counselor for Congressional Affairs at the Embassy of Israel in Washington D.C.

Mr. Ezra joined Israel's Ministry of Foreign Affairs in 1999. Upon completion of the Cadet Course, he served at the Ministry of Foreign Affairs Middle Eastern Economic Division in Israel. From 2000 to 2002, he served as the Economic and Commercial Attaché to Cairo, Egypt. He also served as the Deputy Consul General, for the Southeastern region of the U.S., at the Consulate General of Israel in Atlanta, Georgia, from 2002-2006.

During his service in the Israel Defense Forces he achieved the rank of Captain. Following his military service, he received a B.A. in Economics and Political Science from Hebrew University in Jerusalem. After graduating, Mr. Ezra worked for two years in the private sector as COO of a publishing company.