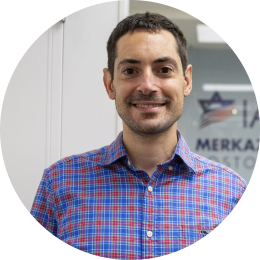 Gilad has been the Executive Director of Northeastern University Hillel for the past five years. Prior to that, he worked at CAMERA, including as the Director of Campus Programming. While at CAMERA he oversaw the activism work of student leaders on campuses across the country.

Gilad received an M.A. from the University of Delaware in Urban Affairs and Public Policy and a B.A. degree from the University of Massachusetts-Amherst in History, Communication, and Judaic Studies. His junior year was spent studying at the Hebrew University in Jerusalem. After college, he served in the Dover Tzahal/Spokesperson's Unit of the IDF.

Gilad was born and raised in Kibbutz Kissufim in Southern Israel and moved to Newton, MA when he was 5-years-old. Gilad's roots run deep in the Jewish-American community as he is a 5th generation American.

In addition to spending time with his wife, Rachel, his children Ilan and Maya, and labradoodle Meeshmeesh, Gilad loves gardening, hiking, and traveling.