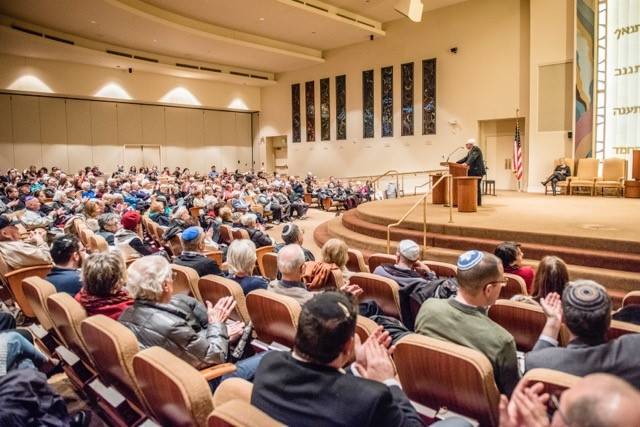 For most people in Las Vegas, the snow this past weekend was a rare excitement. Yet, for the Jewish community, excitement quickly morphed into concern when a large swastika was etched into the freshly-fallen powder on Sunday night at Arbors Paseo park in Summerlin. I was appalled to learn that in that same park, the N-word was also written in the snow. Anti-Semites and bigots, whether on the far right or far left, threaten the core values of American society: democracy, free speech, and freedom of religion. We cannot stand by in the face of this imminent threat.

According to the Anti-Defamation League (ADL), anti-Semitic incidents have recently risen by sixty percent. The imperative of the moment is clear: it is not enough to speak out against anti-Semitism, we must educate our community on the implications of this kind of hate. That is what the Israeli-American Council (IAC) is doing throughout our regions, from coast-to-coast. We are making it clear that anti-Semitism of any kind, including modern-day anti-Semitism that pretends to be legitimate criticism of Israel, will not be tolerated.

In Boston, the IAC has worked with local partners to address chronic bias against Israel, the only Jewish state, in the curriculum and programming of the Newton Public Schools district. This includes opening a dialogue about the district’s problematic Middle East Day, during which a one-sided film was screened, and no Israeli perspective was presented.

And in our region, IAC Las Vegas co-hosted a town hall meeting this month at Temple Beth Sholom  – together with partner organizations –  to address how we can act against anti-Semitism. Our expert panel, which included leaders from different faiths, addressed the importance of combating this hate head on. And the keynote speaker, Dr. Bernd Wollschlaeger, shared his journey as the son of a Nazi who converted to Judaism, served in the Israel Defense Forces, and lives in Israel today. Dr. Wollschlaeger offered a universal message: we must teach the next generation to stand against hatred, bigotry, and stereotyping.

We heard this message last fall as well, at the IAC National Conference, where Vice President Mike Pence spoke to an audience of over 3,000 about the growing danger of anti-Semitism – which often masks as anti-Israel sentiment – and promised that the U.S. government “will confront and condemn [anti-Semitism] everywhere it rears its ugly head.”

Speaker of the House Nancy Pelosi and Senate Minority Leader Chuck Schumer echoed the sentiment. They gave voice to the importance of building and sustaining bipartisan American support for Israel.

In recent years, another leader has shown courage on countless occasions when she stood up to anti-Semitism and the delegitimization of Israel at the United Nations: Ambassador Nikki Haley. In 2017, addressing the IAC National Conference, Ambassador Haley said that she was there “to let the world know that Israel is not alone.”

Time after time, Ambassador Haley delivered on her words through historic actions at the United Nations (UN). She oversaw the America’s withdrawal from both the UN Human Rights Council and the UNESCO cultural agency over those bodies’ chronic anti-Israel bias. She persistently called out the UN General Assembly on its moral failures like refusing to condemn Hamas terrorism. And she made it clear that the United States would not tolerate a double standard placed on the only Jewish state in the world.

In March, IAC Las Vegas will stand up again against bigotry and hate, by publicly honoring Ambassador Haley for her legacy of fearless support for Israel and the Jewish people at our 5th annual gala.

And the IAC will continue to stand up in all arenas and combat anti-Semitism in any form that it takes. Join us.

Noa Peri-Jensch is the Israeli-American Council’s (IAC) Regional Director in Las Vegas. For more information on the IAC Las Vegas Region’s March 9th gala in Las Vegas, or how to get involved, email [email protected].