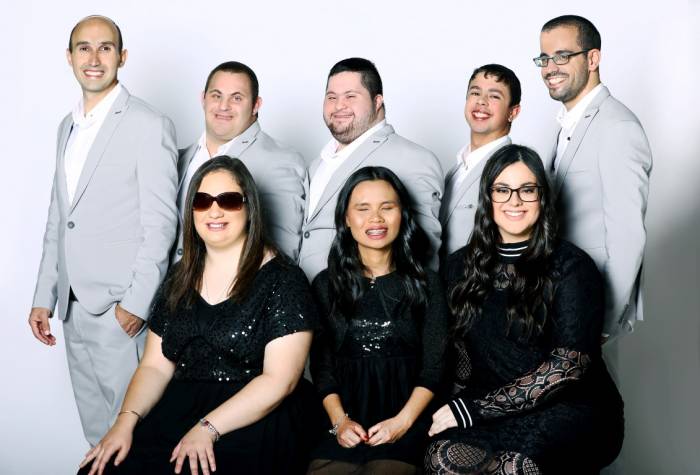 US President Donald Trump stood on stage for the whole performance. At the end, a member of the band embraced the president. Another told the president, "I love you so much."
By TAMAR BEERI   DECEMBER 10, 2019 11:12

Israel's beloved Shalva band, made up of a range of young adults with varying disabilities, hit the stage at the annual Israeli-American Council (IAC) event on Saturday night.

They were called onto the stage by US President Donald Trump, who introduced them as a "very special performance."

The band performed their unique rendition of "God Bless America." Trump stood onstage during the entire production.
The moment the song was over, one member of the band ran to Trump for a hug, who accepted and immediately went on to greet the rest of the members, one of which could be seen saying, "I love you so much."
Shalva band originally began as a music therapy group started by Shalva, the Israel Association for the Care and Inclusion of Persons with Disabilities.
The band previously competed and made it to the finals in The Rising Star competition, which was to determine Israel's entry in the Eurovision contest, but dropped out because performing at Eurovision would have required rehearsals on Shabbat. Shalva band nonetheless got the opportunity to perform at Eurovision a special guests and received a standing ovation.
The IAC intends to unite Israelis who moved to America with the Jewish State. Attendees spent Thursday through Saturday discussing the most “pressing matters in Diaspora Jewish affairs.”