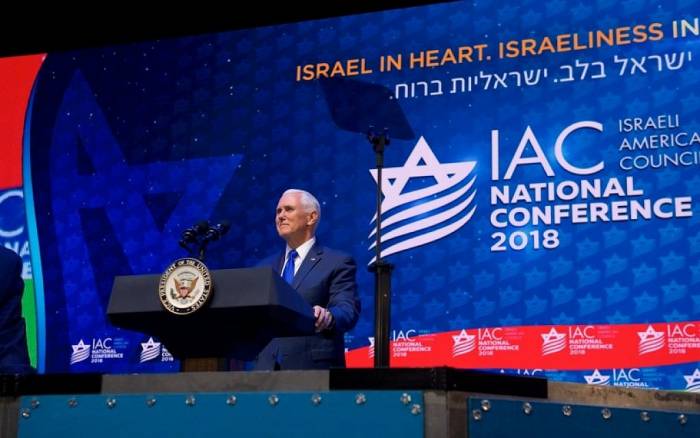 MIAMI (CBSMiami) – Vice president Mike Pence wowed a crowd of some 3,000 people at the annual convention of the Israeli-American Council being held at the Hollywood Diplomat Hotel.

He made much of President Trump ordering the U.S. embassy moved from Tel Aviv to Jerusalem.

Trump has endeared himself to Israel and Israeli-Americans with that order, recognizing Jerusalem as the nation’s capital.

Pence said there will be no Middle East peace plan as long as Palestinians fire missiles into Israel.

“The United States of America will never compromise the safety and security of the Jewish state of Israel,” Pence told the applauding crowd. He said standing with Israel is not up for debate.

“Support for the Jewish state is not a partisan issue, it is an American issue,” Pence declared.

Pence condemned anti-Semitism, something that is spiking in America.

He declined to comment on whether President Trump has fueled prejudice with some of his controversial remarks, and anti-immigrant stance.

The vice president brought down the house at every turn in his speech, ending with a Jewish prayer days before the beginning of Hanukkah.

The conference continues through Sunday. Among other notable speakers will be Senate minority leader Chuck Schumer, and house majority leader Nancy Pelosi.