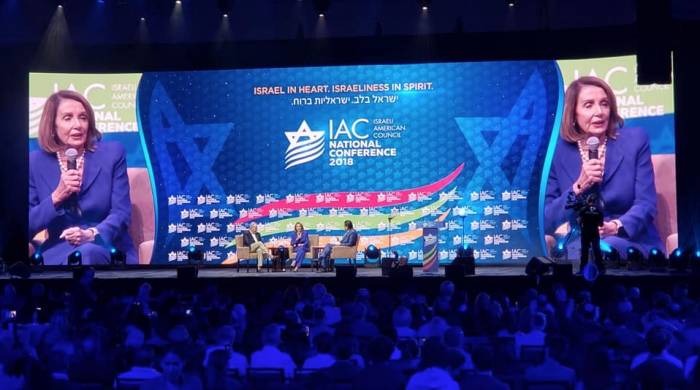 Speaker of the House-Elect Nancy Pelosi (D-Calif.) and Senate Minority Leader Charles Schumer (D-N.Y.) expressed the need for bipartisan support of Israel during the 2018 Israeli-American Council conference in Florida on Dec. 2.

Pelosi and Schumer were part of a discussion with key IAC supporter and philanthropist Haim Saban, where Pelosi said it was “important keep it [Israel] bipartisan.”

“I’m very pleased that our caucus has overwhelmingly been supportive of Israel,” Pelosi said, adding that “70 percent of Jewish people in our country voted Democrat” in the 2018 midterm elections.

Schumer reinforced Pelosi by pointing out that there was “very close to unanimous” support among Senate Democrats for the Taylor Force Act, a law that prevents the Palestinian Authority (PA) from receiving money unless it ends its policy of paying terrorists to kill Israeli Jews. He also pointed to Sen. Rand Paul (R-Ky.) being the reason why the U.S.-Israel Security Assistance Authorization Act has stalled in the Senate.

“The young people have seen Israel as strong, because in their lifetimes that’s what it is,” Schumer said because young people didn’t live through the Six-Day War, when there was uncertainty surrounding the survival of the Jewish state.

Schumer added that Israel supporters need to get the younger generation to understand that Israel’s existence is still “precarious,” and added he thinks young people could be kept apprised online.

Pelosi, speaking about Trump’s pending Israel-Palestinian peace plan, said that she and other Democrats hope that it embraces “a two-state solution,” prompting some audience members to shout “No way!”

“We have to strike a balance,” Pelosi argued, but added that the Palestinians have to prove themselves as “responsible negotiators and we haven’t seen a lot of that thus far.”