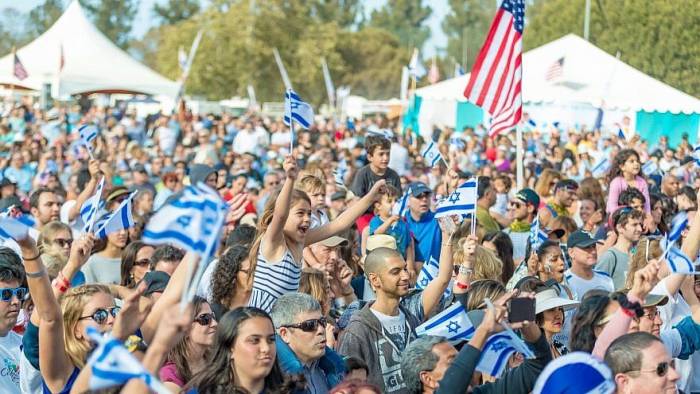 A month of events will provide “a platform for people of all backgrounds and perspectives to radiate love into their communities and show their support for Israel,” according to the Israeli-American Council.

(May 17, 2019 / JNS) Israelis, Israeli-Americans and supporters of Israel worldwide had circled May 8-9, as their occasion to celebrate the Jewish state’s 71st birthday. Indeed, this year’s Yom Ha’atzmaut (Israeli Independence Day) came and went with the usual festivities.

But for the Israeli-American Council and those who participate in the organization’s programming nationwide, the party has only just begun. And it comes at a time when the American-Jewish community arguably needs upbeat moments more than ever.

Throughout May and June, more than 50,000 people are expected to participate in the annual IAC Celebrate Israel festivals throughout the country. The largest gathering within this network of 24 events in 18 U.S. states is anticipated to draw 15,000 attendees on May 19 in Los Angeles.

Following last October’s synagogue shooting in Pittsburgh and more recently, the shooting at Chabad of Poway on the final day of Passover last month, the Celebrate Israel events are “providing a platform for people of all backgrounds and perspectives to radiate love into their communities and show their support for Israel,” according to the IAC.

Rachel Dadon, a member of the Las Vegas community, told JNS, “Our community comes together to show how united we are, especially with all the tragic events recently. We support each other, we support the State of Israel, and we show our gratitude to the amazing United States for being such a great nation that accepts people from all over the world and makes them feel at home.”

While anti-Semitism rises in America and globally, the IAC is striving to ignite corresponding surges in pride for Israel and Jewish unity. The Celebrate Israel festivals serve as “big-tent events for all Israel-lovers, demonstrating how the Jewish state embodies one future and one essential bond for the Jewish people,” said IAC co-founder and CEO Shoham Nicolet.

“The events are a testament that Israel is a source of pride and a force for unity within the Jewish community,” he added. “People of all backgrounds are proud to join together around their shared love and support of Israel, and this is what we need, now more than ever.”

The Los Angeles event will feature two visually compelling displays of pride and strength for Israel and the Jewish people: a one-mile “Celebrate Israel Walk” that departs from the festival’s entrance, and a Tiger Squadron formation flyover during the festival’s formal ceremony. The event also includes a performance by popular Israeli singer Lior Narkis, photo opportunities at some of Israel’s landmark sights, a Jerusalem shuk (marketplace), a Tel Aviv beach experience, an Israeli desert landscape and a simulation of the Ramat Gan Safari.

Additionally, the Los Angeles festival will feature “Heroes: Jewish Trailblazers Experience,” a project from the Museum of the Jewish People that will educate attendees about heroes throughout Jewish history, such as scientists, intellectuals, leaders, revolutionaries, cultural figures and athletes.

“We were incredibly lucky to grow up in a place like Israel—surrounded by our history, our heritage, and a rich and diverse culture,” said Naty Saidoff, a Los Angeles-based Israeli-American philanthropist who founded the original Celebrate Israel festival in 2012. “Now that we live here, we want our fellow Americans who have embraced us so warmly to share in the experience of all the beauty that is the modern-day miracle called Israel. This one-day festival is the closest you can come to truly being there.”