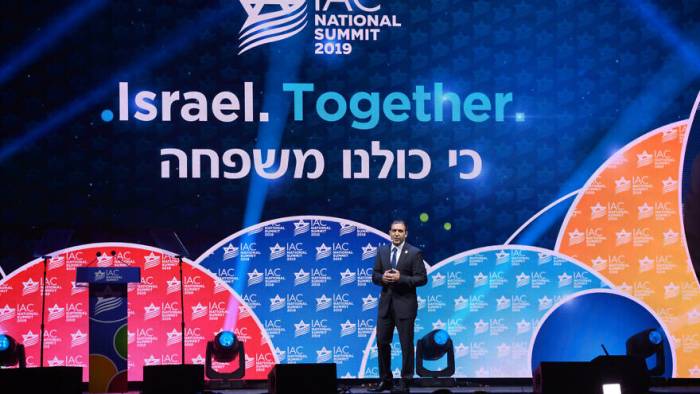 At a time of much division in the Jewish world, the program offer diverse opinions that span the political and religious spectrum around the theme of “Israel, Together.”

(December 6, 2019 / JNS) More than 4,000 attendees from around the world have convened in Southeast Florida for the Israeli-American Council’s (IAC) National Summit, which kicked off on Dec. 5 at the Diplomat Beach Resort Hollywood.

At a time of much division in the Jewish world, the summit, taking place Dec. 5-8, will offer diverse opinions that span the political and religious spectrum around the theme of “Israel, Together.”

During the opening plenary, IAC co-founder and CEO Shoham Nicolet addressed the packed ballroom with welcome greetings and a call to unify the world’s two largest Jewish populations: American and Israeli Jews.

“The (IAC)’s coast-to-coast community is becoming the bridge, the gateway, and the driving force within Jewish America, fostering a deep connection to Israel,” said Nicolet. “We create the leaders of tomorrow that will face threats along the journey with courage and cutting-edge solutions. This leadership will make a transformative impact on Jewish-America and our society.

“It is time for us to shift our focus from differences and rifts to the endless possibilities and opportunities when we come together,” he continued. “This is what the IAC is all about. Together, we will work towards our vision of a strong, resilient, interconnected Jewish people and Israel.”

Attendees at the opening plenary also heard from Yonatan Winetraub, co-founder of SpaceIL, the revolutionary Israeli space exploration company whose “Beresheet” spacecraft made international headlines by crash-landing on the moon in April. Although it was not a “soft landing,” it was still a tremendous accomplishment, making Israel only the seventh nation to ever orbit the moon. Moreover, SpaceIL achieved lunar orbit while working with what experts widely considered a shoestring budget of $100 million.

Netta Barzilai, winner of 2018 Eurovision Song Contest, also sat down with Israeli journalist Dr. Hila Korach for a conversation. Barzilai won the international singing competition with her lively song “Toy,” which has become a global anthem of self-empowerment for people of all backgrounds and ages.

“I felt like I was amazing but not because I was Israeli,” she said. “But after experiencing what it’s like to be the face of Israel, I didn’t even have to get into politics in order to tell [the world] how truly amazing people we are as Israelis. We have togetherness that no one will ever get. Whenever I come off a plane in Israel, I thank G-d I am from here.”

Also speaking at the opening plenary was IAC chairman of the board Adam Milstein; incoming chairman Naty Saidoff; Rachelle Fraenkel, mother of Naftali Fraenkel, who was kidnapped and murdered along with two other Israeli teens June 2014; Greensky CEO David Zalik; Canadian-born Israeli businessman and philanthropist Sylvan Adams; and Yiftach Ramon, son of Israel’s first and only astronaut Ilan Ramon, who died in a tragic accident during his first trip to space.

U.S. President Donald J. Trump will deliver the keynote address at the summit on Dec. 7, marking the president’s first address to a nonpolitical Jewish organization.