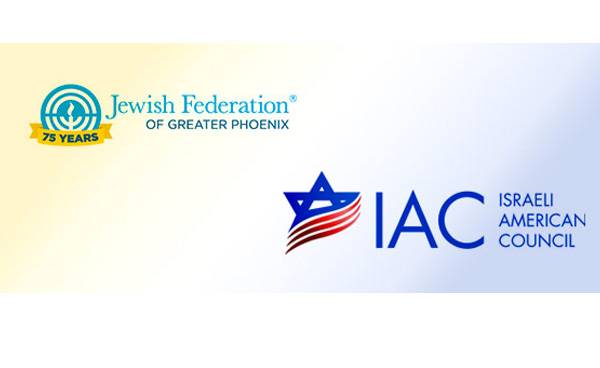 IAC to open its 11th regional office nationwide, working with the Federation to engage and integrate Israeli-Americans and the Jewish community in Phoenix

Phoenix, AZ – Today, the Jewish Federation of Greater Phoenix and the Israeli-American Council (IAC) announced a major joint venture agreement that promises to enrich Jewish life in Arizona and more closely connect the Jewish-American and Israeli-American communities in the region.

With the launch of the new partnership, the IAC opened its 11th regional office and has assumed management of the Federation’s popular Israel Center, forming the IAC Arizona Center. It is located on the Ina Levine Jewish Community Campus in Scottsdale. Shahar Edry, the former director of the Israel Center at the Federation, has been named IAC Arizona Regional Director. Both organizations thank Dr. Miriam and Sheldon Adelson for their vision and support in establishing IAC Arizona and the joint venture as part of the IAC’s expansion nationwide.

“This partnership marks a significant step forward in our organization’s rapid growth, and sends a clear message about the powerful unity and synergy between our communities. We believe that replicating this IAC-Federation collaboration model will bring a new wave of Israeli-Americans into the Jewish American community,” said IAC Co-Chair and CEO, Shoham Nicolet. “From Boston to Washington, DC, from Tenafly, New Jersey to Arizona, the IAC is engaging with our Jewish American partners in unprecedented ways, highlighting how Israeli-Americans and Jewish-Americans can mutually benefit by working closely together.”

Federation President & CEO Stuart Wachs believes the partnership will capitalize on the strengths of both organizations, and ultimately increase connections and engagement between the local Jewish and Israeli-American communities.

“This joint venture will enable two organizations already doing fantastic work engaging Phoenix’s Israeli-American community to do even more,” said Wachs. “With our combined resources and brand recognition, the IAC and the Federation will be able to serve the community more broadly, advancing our shared values and interests.”

For many years, the Federation’s Israel Center has offered an array of programming to integrate Phoenix’s Israeli-American community with the local Jewish community. By combining forces with the IAC, the two organizations will leverage their capabilities, connections, skillsets, and leadership to provide better services, more community support, and a stronger bond with the State of Israel. The partnership also brings the entire portfolio of IAC programs and community building expertise to Arizona and could serve as a hub of IAC activity for the entire Four Corners region.

About the IAC: The IAC is committed to building an engaged and united Israeli-American community that strengthens our next generations, the American Jewish community, and the State of Israel. It cultivates leadership and empowers communities through programs and initiatives in 27 states, serving more than 250,000 people. For more information about the Israeli-American Council, please visit www.israeliamerican.org