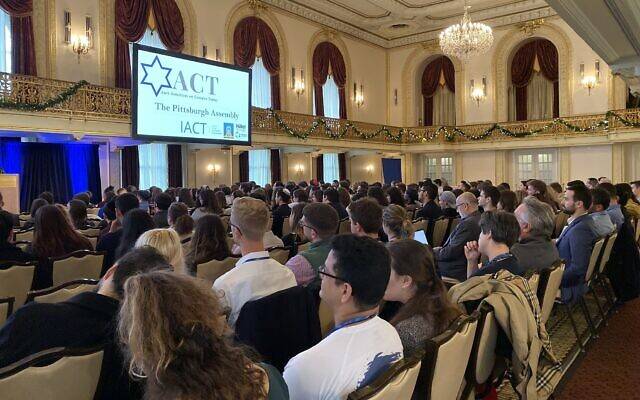 School Watch is designed to contribute to a safe school environment in the U.S. and reduce incidents of anti-Semitism, anti-Zionism and national origin discrimination.

A Los Angeles-based nonprofit that works to strengthen Israeli and Jewish identity is taking a step stateside to combat the proliferation of hate. The Israeli-American Council (IAC) has launched a new website, called School Watch, which is designed to contribute to a safe school environment in the U.S. and reduce incidents of anti-Semitism, anti-Zionism and national origin discrimination.

Students, parents or educators who have encountered anti-Semitism or anti-Zionist conduct or content in schools can file complaints through the online platform. The IAC says it plans to bring these complaints to the attention of the school or district to ensure they are properly addressed so that similar incidents do not recur. Complaints can be filed anonymously.

“In recent months we have received many reports from parents and students within our community of anti-Semitism and bias in classrooms,” Shoham Nicolet, co-founder and CEO of the IAC, told the Chronicle. “School Watch will help streamline these complaints and allow the IAC to act quickly where needed in order to ensure a safe environment for our children.”

The School Watch platform will help students and parents report on a range of anti-Semitic content — “from the teaching of the anti-Israel Boycott, Divestment and Sanction (BDS) movement, anti-Zionism, as well as false representations of Israel, the American-Jewish community, its history or its culture, to allegations of biased teaching,” according to an IAC spokesperson. In addition, School Watch will enable people to file complaints concerning discrimination and harassment around inflammatory content or anti-Zionist biases among educators.

The Anti-Defamation League operates a similar, though slightly different, platform — its Tracker of Anti-Semitic Incidents. That website compiles cases of anti-Jewish vandalism, harassment and assault reported to or detected by the ADL. An ADL “map,” also available online, provides comprehensive statistics on domestic instances of anti-Semitism, extremism and terrorism.

Several Jewish Pittsburghers — even those whose lives were not directly impacted by the massacre of Oct. 27, 2018 — have experienced anti-Semitism and anti-Jewish bias in schools.

In 2017, students at Upper St. Clair High School studying Elie Wiesel’s memoir, “Night,” created and displayed posters filled with swastikas and photographs of Adolf Hitler. The school district removed a dozen of those posters after receiving several complaints from Jewish students and their parents.

“People just don’t understand what they’re doing,” said Debra Levy, whose three sons attended Upper St. Clair High School — one of whom lodged complaints about the posters. “Nazi symbols, without context on posterboard as you’re walking down a hallway at the high school, it’s not a pleasant experience.”

Anti-Semitism was an issue for Shirley Holtzman Schwartz back when she was growing up in Pittsburgh’s Hill District in the 1940s. Holtzman Schwartz lived in subsidized housing in Terrace Village and remembers Black and white peers in segregated Pittsburgh shouting anti-Semitic epithets and slurs at her as she walked to Miller Elementary School and, later, at Fifth Avenue High School.

Holtzman Schwartz, 84, said some incidents of anti-Semitism stemmed more from ignorance, insensitivity or lack of education than malice. Even friends of hers, she said, used to mock her around Pesach for eating matzah — or “Jew crackers,” as they called them.

Yafa Schnadower recalls anti-Semitic incidents in a Mexico university in the 1990s.

“It was ‘Do you Jewish people really grow horns at night?’, things like that,” Schnadower told the Chronicle. “They’d say, ‘I’m sure the U.S. is trying to get all the oil in the Middle East’ or ‘Why do Jews steal land from Arabs?’ I’d always tell them, ‘It’s not a simple answer because the history is very long.’ But, sometimes, I didn’t know what to say.”

Even university staff, she said, made stereotypical assumptions, with one professor asking her about a local JCC exercise program’s cost. He said he asked Schnadower about it “because Jews have lots of money.”

Schnadower said she never encountered anti-Zionist academia at the university, an area of increasing concern for people who monitor anti-Semitic or anti-Israel content. One student writing to IAC’s School Watch said a teacher at his California school assigned the class to write about how Jews were mistreating Palestinians during the COVID-19 pandemic, according to the IAC website.

Holtzman Schwartz worries. Decades ago, she confronted her neighbor, a Christian boy who threw religious slurs at her. While they were fighting, the boy’s mother came to the street telling her son to “kill that Jew.”
When it comes to anti-Semitism, modern times remain dire times, she said.

“I personally think things are worse because now they have license,” Holtzman Schwartz told the Chronicle. “They’re coming out of the woodwork. And, frankly, it scares me.” PJC

Justin Vellucci is a freelance writer living in Pittsburgh.