IAC Delegation to the March of the Living 2019 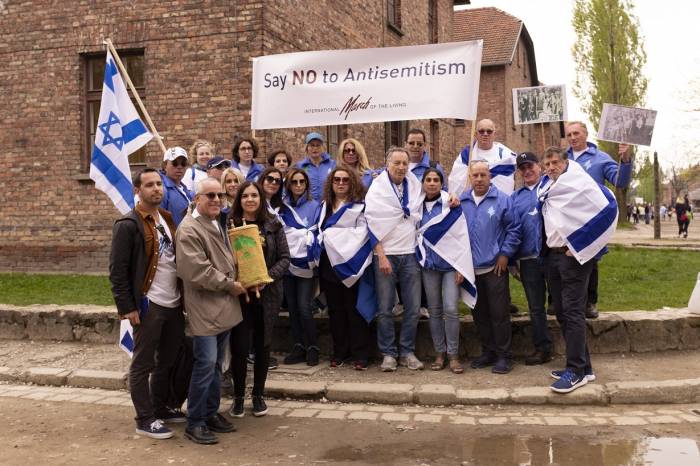 “When you hear a witness, you become a witness” Elie Wiesel (Z”L)

On Holocaust Remembrance Day, the IAC delegation, along with 10,000 people from around the world, marched from Auschwitz to Birkenau to commemorate Holocaust victims, to honor their memory and vow to stop anti-Semitism. The IAC marched to remember and to affirm our unshaken commitment to the future, our promise that Never Again means Never Again.

During the March, The IAC delegation was joined by Stuart, Evie, Paige, and Jack Steinberg, the family of Max Steinberg (Z”L), a lone soldier in the IDF who lost his life during the Gaza war. The Steinbergs had dedicated a Torah Scroll for Max, which was carried with the IAC delegation and will be later taken to Israel. Max Steinberg’s story touched the entire community, as an American Jew who volunteered to serve in the IDF as he made the ultimate sacrifice for the Jewish homeland.

With anti-Semitism on the rise, the IAC was compelled to send its first-ever IAC delegation to March of the Living.  Heeding Elie Wiesel’s words, the group embarked on an important journey in an effort to witness the horrors of the Holocaust, to honor the memory of those who perished and to fulfill our commitment to the next generation. The delegation was organized by Dorit Evenhaim, Chair of IAC March of the Living.

The 18-person delegation began a life-changing and life-affirming journey together.  The trip began with a visit to the Warsaw Cemetery, one of the largest Jewish cemeteries in pre-war Poland. From Warsaw, the delegation traveled to Treblinka death camp where almost a million Jews perished in the short span of 13 months.

While in Treblinka the group honored Paula Lebovics, a Holocaust Survivor from Ostrowiec, who shared her story with the IAC in LA. In solidarity with Paula, the group wrote her prisoner number on their forearm and placed a flower to remember and pay homage to those who perished.

The delegation visited Majdanek concentration camp, where the prisoner barracks, crematorium and gas chambers remain perfectly preserved.  Gathering around a mountain of human ash, the group solemnly sang the Kadish followed by the Hatikah.  It was a moving moment to honor those who perished under unimaginable Nazi brutality.

The group also visited one of the killing fields of the Polish forests, where thousands of Jewish families were murdered.  In a place where once entire communities flourished, today there are only abandoned ruins of synagogues and burned testaments of Jewish life.

The journey concluded with moving Havdala ceremony – where thousands of Jewish teens, families and Holocaust survivors danced and sang together in a Krakow synagogue. Once again filling the synagogue with song and prayer, and ending the journey with a message of hope -- Am Israel Chai! Do “Seeing the next generation at the Havdala service, singing, hugging, wearing blue Kippahs so proudly, creates the hope that the new generation will overcome. We will always fight for those who died and for the future of our beloved country Israel,” said Dorit Evenhaim.

The motto at this year’s March of the Living was “No to Anti-Semitism.” The IAC has committed to fight anti-Semitism as a community. The March of the Living is only a part of a larger national effort across the IAC community.  During Holocaust Remembrance Day, the IAC launched a national campaign, “6m,” the campaign is a platform to expose, delegitimize, and neutralize antisemitism nation-wide. Together we are committed - Never Again!