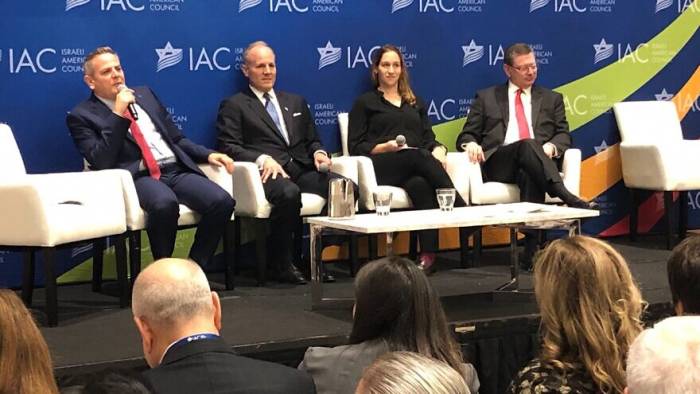 A panel addressing at the Israeli-American Council National Summit demonstrates where progressive views differ from mainstream Jewry in classifying anti-Israel bias as Jew-hatred.

(December 11, 2019 / JNS) With anti-Semitism in the United States on the uptick, including two deadly shootings in synagogues within six months of each other, multiple philanthropic initiatives have been launched to address the grave nature of the issue. Those efforts are in tandem with measures jump-started by the Trump administration and the Israeli government to defend Jews from hateful rhetoric and violence, as well as go on the counterattack against some of the world’s leading sponsors of and advocates for anti-Semitism.

The issue was one of the most heavily addressed topics at this past week’s Israeli-American Council’s National Summit.

During a special keynote address at the summit, Trump said, “Throughout history, anti-Semitism has produced untold pain, suffering evil, and destruction. We must not ignore the vile poison or those who spread its venomous creed. My administration is committed to aggressively challenging and confronting anti-Semitic bigotry in every resource and using every single weapon at our disposal.”

Trump’s general in the fight is Special Envoy for Monitoring and Combating anti-Semitism Elan Carr, who has been meeting governmental leaders around the world to demand concrete actions to counter anti-Semitic activity in their federal and local municipalities.

While addressing the plenary, Carr thanked the president “for making this fight a top priority for our country,” adding that “at the president’s direction, we are simultaneously confronting far-right ethnic supremacy, radical-left Israel hatred and militant Islam.”

In one of multiple IAC sessions dealing exclusively with anti-Semitism, Carr referred to these factors now primarily responsible for it as an “unholy trinity.”

“All three are on the rise. We are seeing anti-Semitism throughout the world,” he said.

He noted that “this is not only a Jewish problem, and the victims aren’t just Jews. Anti-Semitism is history’s greatest barometer of morality. You win the war by attacking the phenomenon and attacking the manifestation.”

‘Things on the left and right tend to get muddy’

Meanwhile, the head of Israel’s far-left Democratic Union/Meretz Party Nitzan Horowitz, who sat on the panel with Carr, brought a different perspective. “In the United States, most anti-Semitic violence comes from far-right. This should not be balanced. I do not underestimate the radical left, but it should be pointed out that the violence comes from the far right.”

Horowitz insisted that criticism of Israel cannot be considered anti-Semitic, saying that while “some sort of rhetoric may cultivate or encourage an atmosphere of antisemitism, we need to separate between violence and rhetoric. I make a distinction between murder, shooting, violence and rhetoric.”

Rachel Fish, newly appointed founding executive director of the Foundation to Combat Anti-Semitism, who moderated the session with Carr, Horowitz and president of the Genesis Prize Foundation director Steven A. Rakitt, fired back at Horowitz, noting that the “progressive left is creating a crisis on college campuses,” which she said is preventing many lesser empowered and educated Jews from supporting Israel.

“You win the war by attacking the phenomenon and the manifestation.”
Horowitz doubled down, stating, “I do not ignore what you are saying. But in order to fight anti-Semitism effectively, you need to focus on real anti-Semitism. Many Jews [noting himself included] are critical vis-à-vis the policies of [Israeli] Prime Minister Netanyahu. That doesn’t make them anti-Semites. We need to separate criticism, which is what happens on the campus, and with real anti-Semitism.”

Rakitt addressed Horowitz’s position. “When we try to define terms and we can’t agree on definition of terms, that’s where civil discourse can be lost. … Anti-Zionism is anti-Semitism. I am not disputing criticism of Israeli policy by itself is not anti-Semitism. But that line is being crossed every day.”

He provided a recent example of a Canadian student “forced to resign a student government position because she was visiting Israel and the West Bank. That is anti-Semitism.”

He added that “things on the left and the right tend to get muddy. We need to figure out what to do about it, not who is to blame.”

Carr agreed, saying “we don’t rank Jew-hatred. We don’t care what clothing it wears. Once you rank it, you feed into the extraordinary divisive tones we’re in, and we lose the unity we need to fight all of it.”

He also went on to offer examples of where anti-Semitism from both the radical left and radical Islam can lead directly to danger.

“The most disturbing meeting I had on this job,” he related, “was with a U.K. Labour MP who recently walked out of the Labour Party.”

He said the Parliament member told him that “the disaster we have in England all started on the [university] campuses. And we did nothing.”