A Giant of Our Era, Elie Wiesel, Nobel Peace Prize winner and Holocaust survivor, died at 87 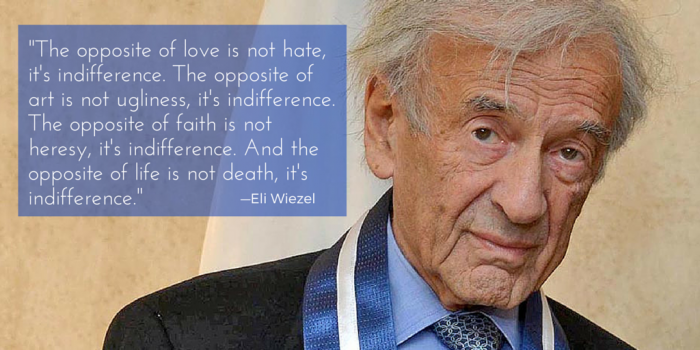 Today our community received the tragic news of the passing of the legendary Jewish leader and hero Elie Wiesel.

His passing is an enormous loss to the Jewish people and for our world. He was the living moral compass of our time.

Wiesel was perhaps best known for his major role in promoting Holocaust education, and doing everything he could to keep the memory of the Shoah alive. His memoir, "Night", based on his experience as a teenager in the concentration camps, is a heart wrenching document and eternal testimony of the darkest times in Jewish history.

He left behind a clear legacy we are obliged to carry on - to never stand idle. Never take the easy path of indifference or neutrality. To never turn our head when we see suffering, or when we see injustice. Never to be silent, and never forget that human rights and justice are precious gifts that we must safeguard with constant vigilance.

This was also the case for him, when it came to his unwavering support for the State of Israel, which he publicly defended time and again in the face of criticism.

Most importantly, Elie reminded us that there is always hope and that good can overcome evil.

May his memory be a blessing for us all.