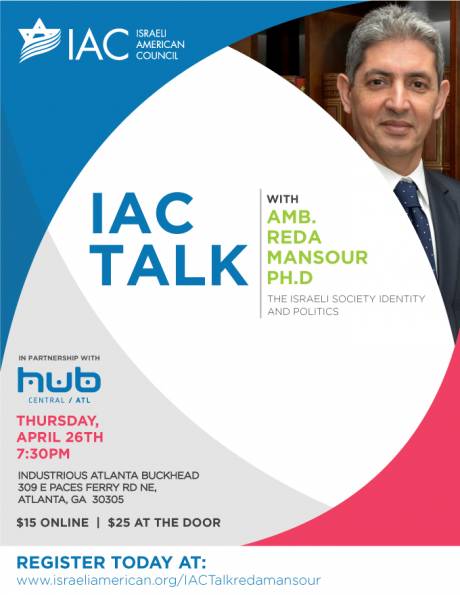 IAC Atlanta in partenrship with the HUB are proud to present; Reda Mansour a Visiting Professor at is Israel Institute Emory
University.

He is former Ambassador of Israel to Brazil and Ecuador.
At the age of 35 he was the youngest Ambassador in Israel's history
and the first non-Jewish career diplomat. Mansour also served as
Deputy Ambassador in Portugal, Consul General of Israel and Dean of
the Atlanta Consular Corps, and Consul in San Francisco.

Professor Mansour holds a PH.D from Haifa University where his
doctoral work focused on the history of modern Syria.  He also holds a
master's degree from Harvard University’s Kennedy School of Government
and speaks five languages.
The Ambassador is a longtime activist in the promotion of coexistence
and integration of minorities.   In recognition for his efforts for
promoting African American and Israeli Dialogue, he was inducted into
the Dr. Martin Luther King, Jr. Board of Sponsors at Atlanta’s
prestigious Morehouse College and Awarded the Israeli Prime Minister
and President Award.

Ambassador Mansour received numerous awards for his innovative
diplomatic Work, among them the International Heroes Award for
Excellence, the “Juscelino Kubitschek” (Brazilian President) Medal of
merit and the Tree of Life Award. He was named one of the "100 Most
Influential Atlantans" alongside many prominent figures such as
President Carter and Congress Member John Louis.

In addition to his diplomatic career, Reda Mansour is an accomplished
author. He has published four books of poetry, as well as a number of
short stories.  He has held readings of his works in many parts of the
world. The Ambassador has received the Haáretz Annual Short Story
Award, as well as the Miller Poetry Award.