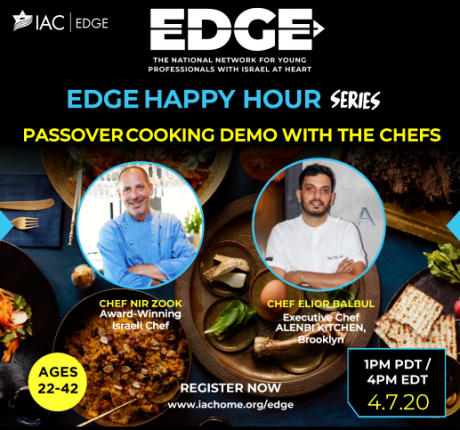 Need advice for preparing Passover holiday dinner? The chefs will teach you a few tricks and ways to upgrade your classic recipes!

Join us and open the Passover Seder with us in quarantine!

Chef Nir Zook - an award-winning Israeli chef who has opened multiple restaurants, authored numerous cookbooks, and starred in various television programs. He was selected by the Foreign Ministry of Israel as a featured chef in the book “Face of Israel” representing the vibrancy of Israeli culinary traditions.

Chef Elior Balbul - a veteran Israeli chef who began his career in the kitchen of Frida Kalo in Tel Aviv. Chef Elior's passion for cooking shines in Israeli Cuisine and when the opportunity came to open the first Kosher Modern Israeli restaurant in New York, he did not hesitate and moved here with his family, filled with enthusiasm and ready for the next chapter in his culinary career.